The Science in the Nineteenth-Century Periodical (SciPer) Index provides a scholarly synopsis of the material relating to science, technology, and medicine appearing in sixteen general periodicals published in Britain between 1800 and 1900. With entries describing over 14,000 articles and references to more than 6000 individuals and 2500 publications, it provides an invaluable research tool for those interested in the representation of science and in the interpenetration of science and literature in nineteenth-century Britain, as well as for students of the period more generally.

In this major relaunch of the database, direct links to online versions of the articles are now supplied for all items where the original periodical is available open access online.

With the expansion of reading audiences and the mechanization of book manufacture and distribution in nineteenth-century Britain, periodicals became the dominant form of communication. The output of the press was staggering, with an estimated 125,000 periodical and newspaper titles issued in England alone in the course of the century. Periodicals consequently played a key role in introducing readers to new discoveries and inventions in science, technology, and medicine, not merely through earnest scientific articles, but also through glancing asides in, for instance, fiction, poetry, and news reports. 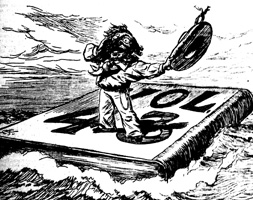 While the vast extent of nineteenth-century periodical literature has presented historians and literary scholars with a superb resource for exploring the cultural meaning of science, technology, and medicine in the period, its very bulk has also presented them with a problem of access. Only an extremely small proportion of nineteenth-century periodicals have been indexed at all, in such important indexes as the Wellesley Index to Victorian Periodicals and Poole's Index to Periodical Literature. Moreover, even in these cases the indexing has only occurred at the level of whole articles, so that references to scientific subjects in articles ostensibly on other subjects remain inaccessible. While the growth of digital full-text versions of nineteenth-century periodicals has offered wonderful assistance in developing this field of research, full-text searching can overwhelm the researcher with unwanted hits. Furthermore, both conventional indexing and digital full-texts have tended to leave illustrative material difficult to locate.


The SciPer index addresses this situation. Constructed by systematically reading runs of sixteen non-scientific titles, it provides details of the scientific references occurring throughout the periodicals, whether in fiction, poetry, illustrations, or dedicated scientific articles. The index has been compiled by experienced nineteenth-century researchers, whose judgement in identifying non-trivial references, and in identifying the people, publications, and institutions to whom reference is made, makes the finished product both more inclusive than conventional indexes, and more incisive than full-text searching. Although the index inevitably represents only a small proportion of the material available, a wide range of periodical formats and genres is represented, from periodicals for children or religious audiences, to the satiric magazine Punch. The indexing is very detailed, including not only the authors, titles, and bibliographical details of articles with relevant references, but also references to people, institutions, and publications mentioned, and in many cases a more extended description.

This electronic index was compiled by the Science in the Nineteenth-Century Periodical (SciPer) project. The project was jointly organised by the School of English at the University of Sheffield and the Division of History and Philosophy of Science at the University of Leeds. It was funded by the AHRC, and the Leverhulme Trust, with further support from the MHRA. SciPer was co-directed by Professor Geoffrey Cantor and Professor Sally Shuttleworth, with indexing by Gowan Dawson, Richard Noakes and Jonathan Topham (see Project Team and Publication for more details).

Since SciPer the researchers have continued to work together, most notably on the large AHRC project, Constructing Scientific Communities: Citizen Science in the 19th and 21st Centuries (2014-19), based at the Universities of Oxford and Leicester (with Sally Shuttleworth as PI, Gowan Dawson as Co-I, and Jonathan Topham as Project Consultant).  https://conscicom.web.ox.ac.uk/   With its focus on nineteenth-century science periodicals (as opposed to science in the general periodical), project research complemented that of SciPer.   Publications from the project include, Gowan Dawson, Bernard Lightman, Sally Shuttleworth and Jonathan Topham, eds., Science Periodicals in Nineteenth-Century Britain: Constructing Scientific Communities (Chicago University Press, 2020). https://www.press.uchicago.edu/ucp/books/book/chicago/S/bo46951589.html

The further research for this relaunch of SciPer was undertaken as part of the Constructing Scientific Communities project, and was generously funded by the University of Oxford John Fell Fund.

Related work was also conducted on the Diseases of Modern Life: Nineteenth-Century Perspectives project, led by Sally Shuttleworth and funded by the ERC. https://diseasesofmodernlife.web.ox.ac.uk/home   A database produced by that project of relevant primary materials from nineteenth-century periodicals is available here: https://diseasesofmodernlife.web.ox.ac.uk/database